This is a quote

Rising Damp was invented by the chemical industry. In a particular chemical industry boardroom in 1962 actually. When the first damp meter was invented and some very astute con man realized they could make millions. I know, because I've spoken to a man who was in that meeting. Have you ever wondered why rising damp isn't in America? Or France, or Germany? You don't walk down the streets of French and German cities seeing ugly injection holes everywhere, do you? No - because they aren't so daft as to be conned by chemical fraudsters.

Do some research on the huge array of services offered by damp proofing companies to stop rising damp and damp walls. Have a look at their Free Survey. Investigate their claims, and decide for yourself whether it makes sense! Oh - put the postcode that's on their website into Google earth - you'll get a nasty shock when you see where they live, and who you'd be dealing with! They've been known to appear in the ads on our pages - so check them out by all means!

They'll probably recommend a water-based chemical be injected - um... aren't we supposed to be getting rid of water? Research all the Timber and Damp companies - look them up, read the wording of their guarantees - ask them whether they cover you for condensation damage in their guarantees - That'll send them screaming for the door...You are going to take a supposedly wet wall, inject a water-based chemical, and it's going to dry out as a result...Do you believe in Father Christmas?

There's even a company called Aquapol or Core Conservation, run by a Scientologist called Val Juhasz who flog you a magnet - it cures rising damp you know - a Bloody Magnet!
Injection holes above... a perfect slate damp course!
This is a textbook photo of injection holes, above a perfect slate Victorian damp course - the wall above was sopping wet until the cement render was removed - it promptly dried out. Thanks to one of my enlightened clients, Stuart - for this photo… 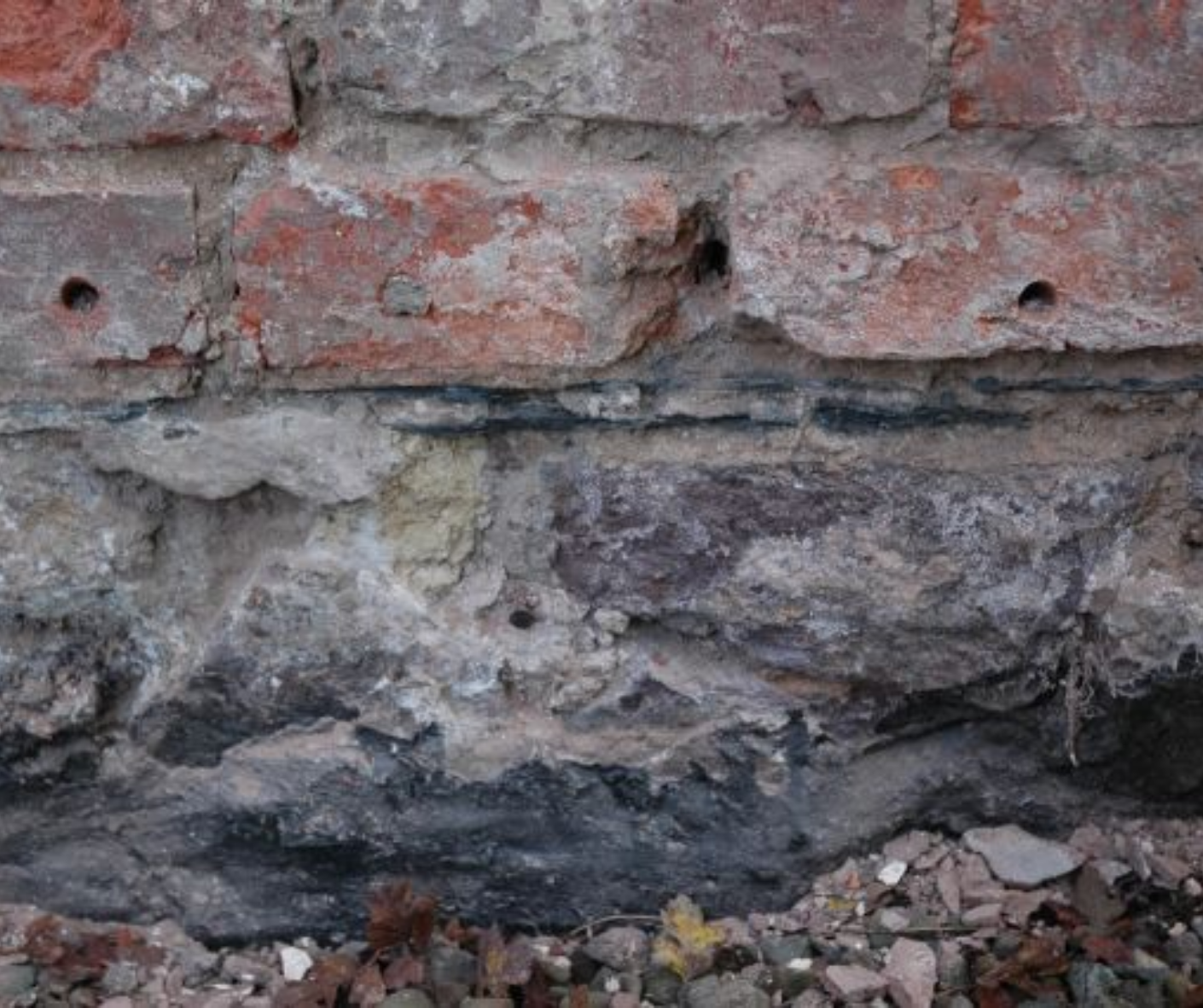 Research the Property Care Association that is recommended by your mortgage surveyor.  Look at the claims made by them.  See how they describe 'Rising Damp' as water that rises up a wall by capillary action, despite the fact that Jeff Howell and many others have consistently failed to ever reproduce this action.  They will probably tell you that damp is controlled by a damp course - which it isn't.  They will describe loads of 'symptoms' of rising damp - all of which are explained by simple things like condensation, penetrating damp, and humidity. They will probably tell you that your plaster will be contaminated with salts and need to be replaced with 'special salt-resistant plaster' - which it doesn't. The whole thing is a giant con.. it sells millions of pounds worth of chemicals, and does nothing for your home. Oh - they used to be called the BWPDA.

Many of these companies also use Big Words and Complex Terms like 'Damp Control' and 'Structural Waterproofing' and they just LOVE 'Flood Restoration' because it makes them look like really important people with lots of technical know-how.  All they actually manage to do is sell you more chemicals in the process...

Rising damp is a wonderful marketing tool used to sell millions of pounds worth of worthless chemicals and labour to an unsuspecting public, irreparably damaging structural brickwork in the process, and don't forget that they always want to re-plaster the walls with impermeable plaster - this just makes the problem come back in ten years or so..! Great for business if you're flogging rising damp treatments...

We have often surveyed damp houses which have had more than one set of holes drilled - some - the worst we've seen, have had three or four sets of injection damp proofing holes and chemicals injected, and they are still sopping wet. When will people, surveyors, and mortgage companies, wake up?

Please... DON'T be fooled into using injection damp proofing - it's a waste of money. Take note that they nearly always make you hack off the plaster to the obligatory metre high - as in the photos below, and give it a 15-year guarantee - then in 16 years, when all the plaster falls off again, its magically out of guarantee, or the company vanished into thin air.. in the 'Guarantee' conditions, there is ALWAYS a clause - the 'getout clause', that says damage from condensation isn't covered.

So.. they do your 'Rising Damp' treatment, and tell you they have cured it... then when you go back to them with the same problem a year or two later ..... 'Oh No... our rising damp treatment worked well - what you NOW have is caused by a different problem - this is condensation... we don't cover this you know - sorry'  Have a look at the Rentokil Case History if you don't believe me - I've blown the Rentokil guarantee apart and shown you the get-out clauses they use:

Rentokil, Peter Cox, Timberwise - and how they get out of their guarantee...

The rising damp fraudsters are not stupid. They know exactly what they are doing, why they are doing it, and how to wriggle out of ever backing up an 'insurance backed guarantee'. Get a solicitor to check the guarantee - it isn't worth the paper it is written on - it doesn't even guarantee the work.. Now we have another bunch of names doing the same - Aquapol, Schrijver - all flogging fraudulent rubbish.

..... Another HUGE con.  It does nothing - but it does put millions a year into the pockets of the chemical companies who get huge kickbacks and commissions from selling it.  It smells - it's fraud. Look at the directors of GPI - they are the same as the directors of the chemical and damp proofing companies.  Look at Peter Cox damp proofing (They are owned by Rentokil these days) - they offer the GPI insurance scam too.

Every damp problem has a specific cause, and it is usually easy to fix that cause - for example, faulty guttering, external ground levels too high, concrete/cement render trapping moisture on outside walls, and so on. Our survey will outline any problems, and suggest solutions, which never include injection damp proofing!

https://markbeaumont.com/blog/the-fraud-of-rising-damp/31027
Go back to the blog

It's inevitable that you will find dampness somewhere in an old house. Nothing lasts forever, but despite English weather, our old buildings stand the test...